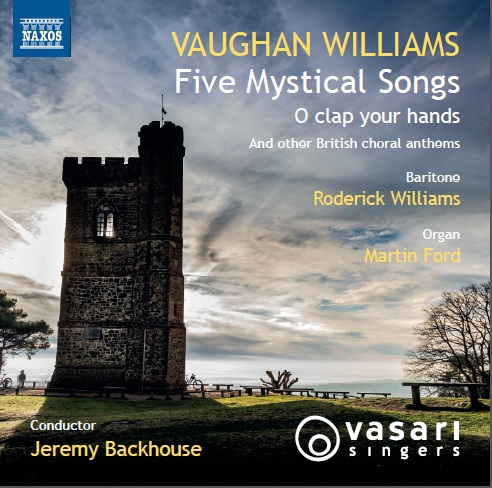 For many listeners the main attraction will be baritone Roderick Williams’s take on Vaughan Williams’s Five Mystical Songs, in a new version for organ accompaniment by Martin Ford. Williams is in sovereign form, noble and resonant in the opening ‘Easter’, plangent and intimate in ‘I Got Me Flowers’. In ‘The Call’ Williams distils a palpable sense of spiritual ache, and the hushed coda with choir is magical. Ford’s organ-only arrangement subtly enhances the devotional atmosphere of the cycle, although the concluding ‘Antiphon’ is predictably rousing.

Anthems by seven other composers complete the programme, allowing the Vasari Singers to take centrestage as the choir enters its fifth decade of existence. Harold Darke’s unaccompanied ‘O Gladsome Light’ is one highlight, the voices immaculately blended and tuned, with conductor Jeremy Backhouse drawing sophisticated shadings of dynamic from his singers. In Patrick Hadley’s ‘My beloved spake’ dynamics are again meaningfully terraced to elucidate the biblical narrative from The Song of Solomon, and there’s an almost sensual allure to the choir’s affectionately nurtured phrasing.

Among the more extroverted pieces, Elgar’s ‘Give unto the Lord’ is full of impressively considered inflections without quite achieving the rush of raw excitement needed in the piece’s opening paragraph. Vaughan Williams’s ‘O clap your hands’ similarly trades adrenalin for an occasionally over-scrupulous attention to detail, and a slightly soft-focus recording takes some bite away from the performance’s impact. But overall this is a rewarding recital, and Roderick Williams’s Five Mystical Songs should certainly be sampled.